First of all, a Happy New Year to all staff and students at RGU! This blog has been a bit quiet last few weeks so new year resolution is to put more out on the blog.

Back in August, I gave an update on our plans for improving the wireless service on our Garthdee campus. Our plan then was to install the new service, based on “Eduroam”, in Riverside East and the refurbished space in Aberdeen Business School, followed by a rollout to the rest of the Campus to replace the previous system. We had hoped that the previous system would have been able to operate for an interim period of time until we completed the full rollout of Eduroam, but unfortunately it continued to cause problems from the start of Semester.

So, we decided to quickly replace all the wireless access points on the old system so that Eduroam is now the only wireless system on Campus. We also installed additional access points in the refurbished ABS Foyer and that has greatly improved the cover there.

However, we don’t yet have wireless coverage across all areas on Garthdee and we are working to extend this over the next few months. At the moment, the whole of Riverside East is covered, the open central areas in Aberdeen Business School, and Faculty of Health and Social Care are covered, Sports Centre and a number of open areas and meeting rooms in the other buildings. Until we get the cover extended, you may find some rooms where the wireless signal is not strong enough to give you a good connection – it’s not broken, it’s just that we haven’t yet brought the new system to these areas.

We know that WiFi is an important service for our users. Students, as usual, have a wonderful way of expressing their service requirements and one of the Class Reps shared this little pyramid with me – thanks! 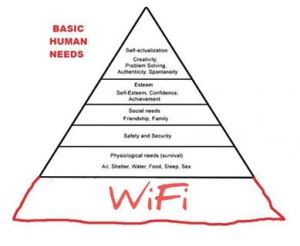 IT Services can see from the system logs that many people are using WiFi without any difficulty, but at the end of last year there were a number of people reporting some problems. Remember, there’s good support material which you can find online on the IT Helpdesk’s support pages.

We made a change in December as recommended by the supplier to address some problems in connectivity and “roaming”. What’s “roaming”, you may ask? Well, when your device connects to a wireless network it connects to a wireless access point (transmitter) close to you. If you move around the building, the system has to release you from the original access point and connect you to another one. Technically, that’s a complex process and sometimes, it can take a minute or two for that to settle down, so if you are finding problems with WiFi as you move around, allow the system a bit of time.

Some people have been confused by “RGU Connect” – you only use RGU Connect once, and what it does is configure all the settings on your device. Once you’ve done that, your device should automatically connect to eduroam from then on. Please don’t try to use RGU Connect as your main WiFi – it causes problems for other people trying to connect, and anyway won’t work very well.

IT Services also found last year that some devices worked better than others – this appears to relate to the manufacturer and the operating system – whether its Microsoft, Android or Mac. IT Services hope that the change made in December will have improved these issues but are continuing to monitor and work with the supplier on this.

Some apps that have worked in the past aren’t working fully. Some of these IT Services have been able to fix, others, are more difficult to diagnose. I am aware that Facebook Apps work on some devices but not on others – this is not a University policy to block Facebook!!! IT Services are continuing to work to resolve these issues, although some of this is dependent on getting information from the people that wrote the apps.

When you visit other eduroam campuses (in Aberdeen you can access it at Aberdeen University and NHS teaching hospitals) you will need to turn off “proxy” settings to allow you to use the service there (remember to note what they are before you turn them off!) then switch the proxy settings back on when you come back to RGU – they are normally “proxy.rgu.ac.uk”.

And finally (!) – if you are running a conference or event, remember that IT Services can provide guest logins for the WiFi. Only guests from other Universities will be able to use eduroam, and even then only if their University supports it.

Error: Twitter did not respond. Please wait a few minutes and refresh this page.